Happy Monday everyone! Since I’m browsing all the new stationery up at the National Stationery Show, it seemed only fitting to start the week with a greeting card round up. And with Valentine’s Day just around the corner, let’s take a look at some love cards! You can even stock up on a bunch of these cards to send sweet love notes to your significant other throughout the year!

1. Worthwhile Paper celebrates a love written in the stars

2. This card from Dahlia Press is such a pretty Valentine’s Day card, but you can also use it to send a sweet note to a friend or loved one any time of year

3. Such a sweet and sentimental card from Our Heiday

4. Life is one crazy adventure. Love this card from Odd Daughter Paper!

5. This card from Ramona and Ruth is perfect for so many occasions!

6. Is your love written in the stars? Give this sweet illustrated card from Pencil Joy

7. February 14 and all the other days from Ink Meets Paper

8. A vibrant and colorful love card from Happy Go Lucky

9. Anyone else prefer a card to a box of chocolates on Valentine’s Day? Now there’s a die cut card for that from Idlewild Co.!

10. One of my favorite designs from Heartswell

Happy Friday everyone! I’m heading up to New York for the National Stationery Show tomorrow, and I’ll be sharing snaps from the show on Instagram starting on Sunday – then here as soon as I can get the photos processed. Covering the show has gotten harder (at least for me) with social media since I tend to take photos with both my phone and my DSLR, giving me twice as many photos to sort through. This year I’m hoping to consolidate with just one camera and hope for the best. You’d think social media would make it easier to cover the show, but it’s actually the opposite for me! Anyway, here are some links for your weekend! Greeting cards by Worthwhile Paper – they’ll be at the Crow & Canary booth at NYNOW (7614)!

Have you been following the couture runway shows? My favorites are Maison Valentino (so much color!) and Ralph & Russo (I specifically want this dress, please and thank you).

How cute is this wicker purse? So perfect for spring and summer!

The Jewish feminism of the Marvelous Mrs. Maisel

I’m into the minimalist vibes of this necklace

Maybe we should be talking about taxes instead of philanthropy

Do you know about World Central Kitchen? Founded by José Andrés, it’s a group of chefs and volunteers that provide food to natural disaster victims around the world – and to federal employees during the shutdown.

These towel rings are very similar to what we have in our bathroom, and I love the extra mother of pearl detail!

So many cute pillows and blankets in this Etsy shop!

This weekend I head up to NYC for the National Stationery Show and NYNOW trade shows – which are taking place at the same time this year, for the first time ever! I’m excited to see all my stationer friends and a wee bit nervous about trying to fit two of my favorite trade shows into the same number of days. Wish me luck – and follow along on Instagram for behind the scenes peeks! Victoria from Paper Epiphanies is exhibiting at NYNOW (Booth 7215!) and sent over a quick preview of a new collection in collaboration with artist Gia Graham that will be debuting at the show! 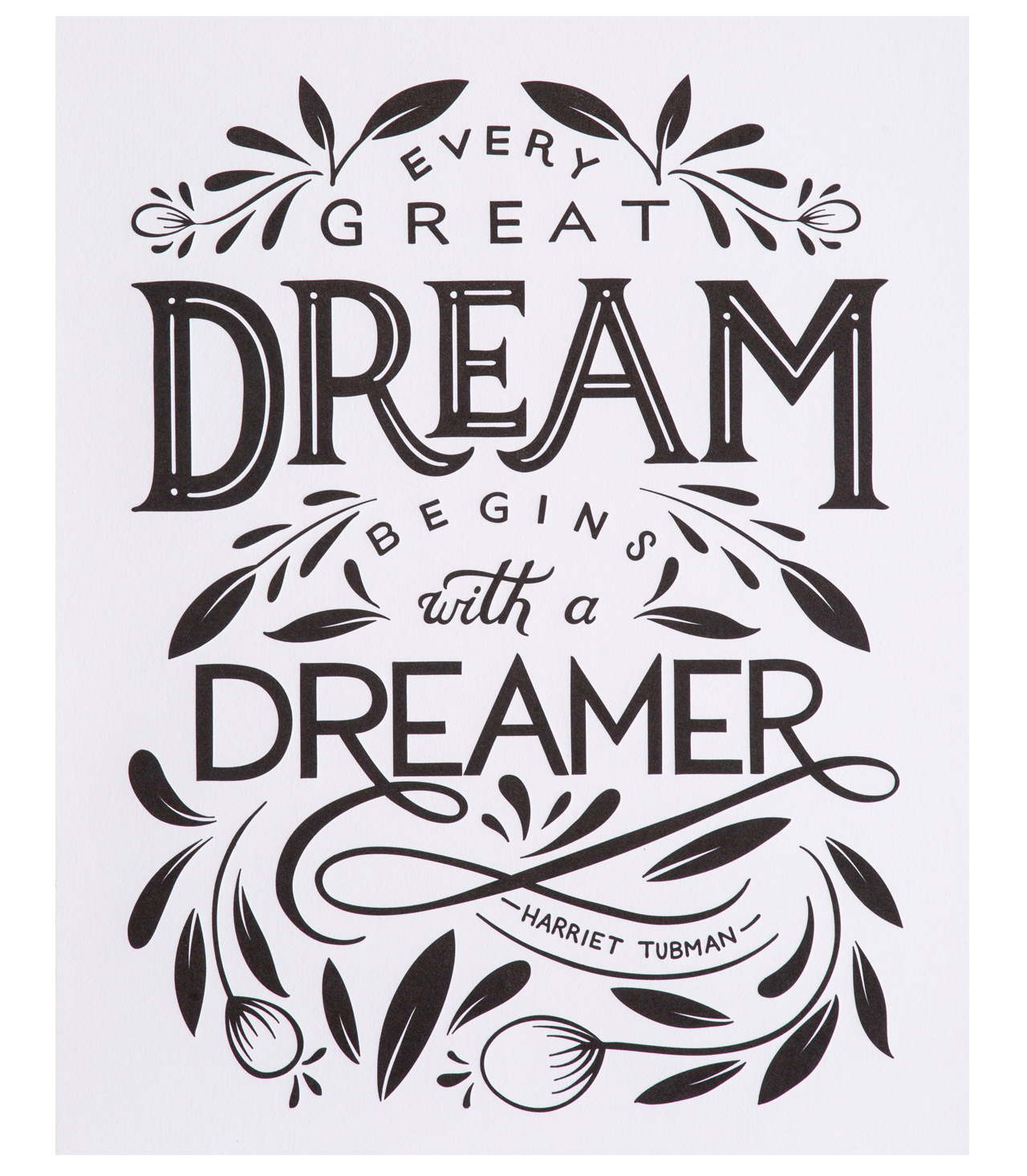 The Gia Graham for Paper Epiphanies collection is called “The Voices” and consists of six greeting cards and three art prints that celebrate the words and life of black women. Each card and art print features a hand illustrated quote from black authors, activists, and poets – including Maya Angelou, Sojourner Truth, and Zora Neale Hurston – while the back of each card features a short biography of each woman. You can see a few more designs from the collection below, and if you’ll be at the show stop by booth 7215 to see the collection in person! 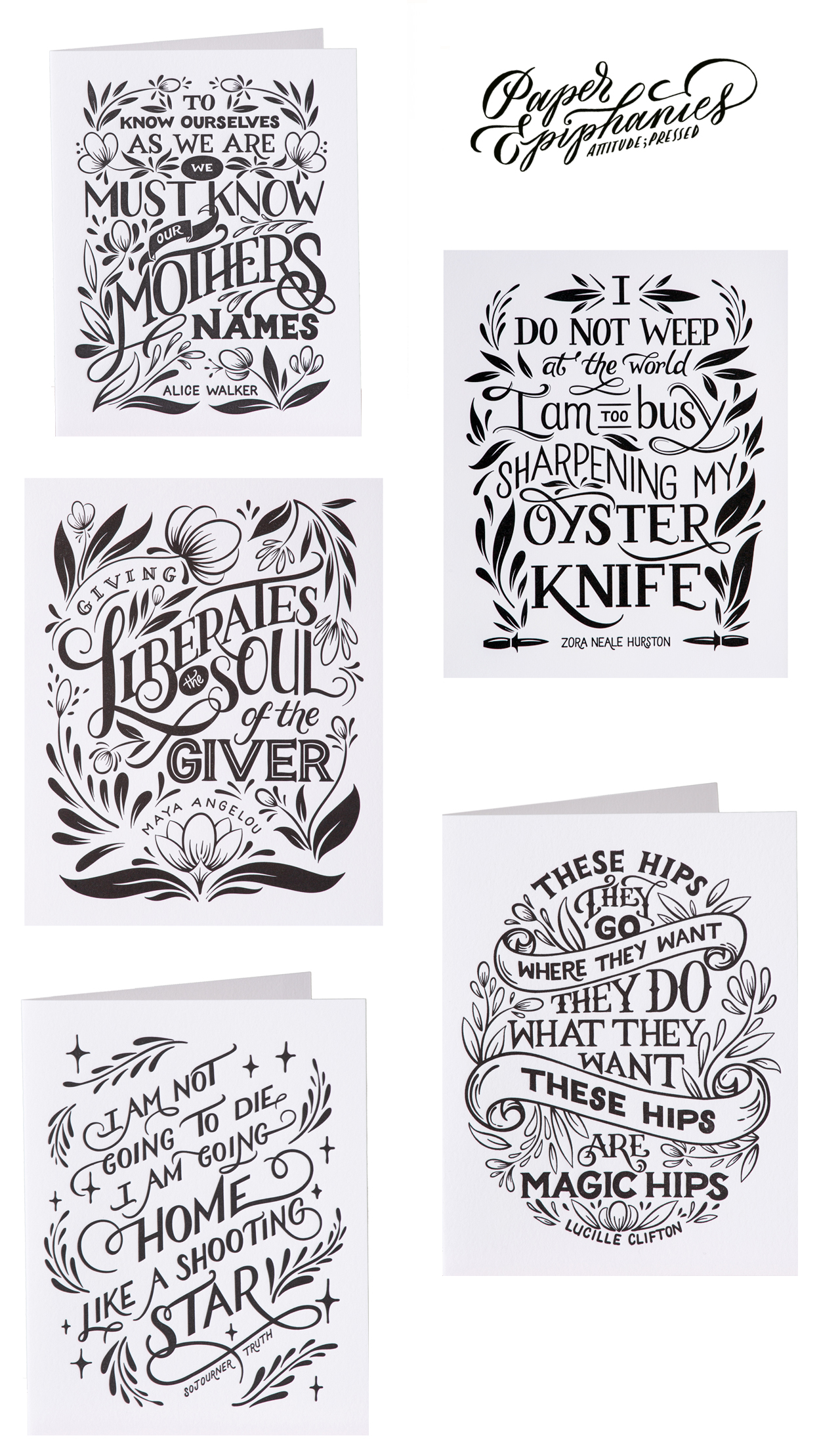 Thanks Victoria and Gia!

Did you ever think you would hear the words organic and tropical together in an invitation suite? Well, today’s the day! Shana from Iris & Marie Letterpress sent over these beautiful organic tropical wedding invitations on handmade paper, inspired in large part by the texture of the Spanish moss at the wedding venue. The entire suite was printed on gorgeous handmade paper from Farmette Press – I just can’t get over those natural deckled edges! – in the most beautiful shades of blue and peach. So dreamy. From Shana: These organic tropical wedding invitations started out with a little flamingo and some handmade paper, and from there the rest just fell into place! I was inspired by the Spanish moss texture at the venue and brought that into the suite using Farmette Press handmade paper. Loren’s paper is very textural, not perfect, and very organic looking – exactly how Spanish moss feels to me. Also inspired by the coast, we added a hand drawn little flamingo friend to the invitation along with custom spot calligraphy by Paulene at Leen Machine Calligraphy. Paulene’s calligraphy added another element of texture with the hand written look that the lines have. The color palette is very spring-y and beachy with all the shades of blue and bits of peachy neutrals. We wanted to keep the colors lush, but still spring-like for the Savannah wedding. The overall suite has a rustic vintage feel with layers of organic textures throughout the suite, including the twine used to tie the suite together and keep everything in place. The calligraphy and text layout reminds me of script from an old document and the twine lends itself to that as well. While there is a lot of texture going on, the overall design is pretty minimal. I kept the text small and to a minimum to let the paper speak for itself. The design is centered in the middle of the invitation to let the edges flow around the words and act as a frame. The leaves on the back envelope flap give the invitation a “fan me with your tropical leaves” vibe and, in my personal opinion, makes it all a little more regal. I absolutely love how these organic tropical wedding invitations came together – from the speckles in the handmade paper to the Spanish moss to the bride’s gorgeous red hair! I live in DC, so the ongoing U.S. government shutdown is pretty much all people talk about these days. 800,000 federal government workers across the country have been scrambling to make ends meet since the shutdown began on December 21. Some are furloughed, meaning they are legally prohibited from working during the shutdown, while those deemed essential (like TSA employees) are working without pay. This Friday they will all miss their second paycheck. My husband is a federal employee at a fully funded agency, so we’re thankfully okay. But many of our friends and neighbors are affected, and I know the shutdown is impacting thousands more outside the DC area. So, I’m curious: are you affected by the U.S. government shutdown? Do you know anyone who is? Maybe you have a friend or family member that works for a U.S. government agency and has either been furloughed or is required to work without pay. Or you know a first time homeowner trying to get an FHA loan. Or there are small businesses in your area waiting for inspections or licenses from USG agencies.

Food inspections, airplane inspections, small business licensing, counterterrorism investigations, Coast Guard operations – these are critical government functions that have been impacted by the shutdown. I think we can all agree that we’d like the government to reopen so federal employees can either get back to work or get paid for the work they’re currently doing. If you’d like to help end the government shutdown, you can join the National Call Day taking place across the country TODAY to put pressure on the Senate to reopen the government.

On Thursday, the Senate will vote on two opposing funding bills that would reopen the government. One proposed by the White House, the other proposed by Minority Leader Chuck Schumer. The White House bill includes the $5.7 billion for construction of a permanent wall and would also impose serious restrictions on asylum petitions for Central American migrants, including limiting the number of people that can apply for asylum and an outright ban on asylum for Central American minors presenting themselves at the border. Those migrants would be automatically returned to their country of origin WITHOUT an asylum hearing. It would also expand immigrant jail beds by 20%, meaning the Trump administration would have extra capacity to detain families seeking asylum in the United States. The White House proposal claims to extend DACA, but instead it replaces DACA with an entirely new program that is far more restrictive, excluding Dreamers who would be eligible for or even in DACA now. The bill from Minority Leader Schumer is a continuing resolution (CR) that would fund the government through February 8 with NO wall funding. It’s a temporary fix, but it would allow government workers to get paid and/or go back to work while negotiations continue.

We need to put pressure on the Senate to vote in favor of the clean CR. You can look up the address and phone number for your two senators here or on 5Calls.org. It’s particularly important to contact your senators if you live in a state with Republican senators, but it’s a good idea to contact Democratic senators, too. You can email your senator directly by clicking the contact link below each senator’s name on this page, and you can contact Senator McConnell directly here. It’s best to keep things short and to the point when contacting your senator. Include your name and exact address so they know you’re a constituent, then tell them exactly what you want them to do. For example:

My name is Sarah Smith and I’m a constituent at 109 Main Street, Townsville, California. I’m calling to urge Senator Harris to vote for the clean Continuing Resolution that would fund the government through February 8 and against President Trump’s hateful, anti-immigrant bill. Holding America hostage for border wall funding is counterproductive and immoral. Congress must pass a funding bill to reopen the government immediately, and override the President’s veto if necessary. Thank you for your time and attention.

And if you get phone anxiety and want to get a message to your representatives out quickly, Resistbot is a texting service that will deliver your message for you. You can also use Resistbot to send a message to the White House! Text the word RESIST to 50409 to get started.

Without public pressure, this government shutdown could go on indefinitely. Federal employees are prohibited from going on strike, so sadly the Trump administration can continue forcing them to work without pay as long as it wants – at least until those employees quit and find other jobs (assuming that’s an available option for those employees). I don’t think it’s right to treat federal employees this way, and the longer this shutdown continues the bigger the impact will be. We should demand that our elected officials do everything possible to pass a funding bill and reopen the government, with or without the President’s support.