We looooove calligraphy here at Oh So Beautiful Paper, from traditional flourishes to modern styles and everything in between. We’ve had the pleasure of featuring the beautiful calligraphy of Kathryn Murray in our monthly calligraphy feature and love seeing her work on wedding invitation envelopes and place cards. And today we’re super excited, because Kathryn is giving away her beautiful custom calligraphy address stamps to TWO lucky readers! The lucky readers will each receive one acrylic address stamp (so you can see where you’re placing the address on the envelope!), a calligraphy monogram stamp, ink pad, and set of 8 blank cards and envelopes – you’ll be able to start writing letters to your friends and family right away! To enter, visit Kathryn’s website and browse through her gorgeous calligraphy portfolio. Then come back here and leave a comment telling us who you love writing letters to the most and why! Perhaps your sister, parents, or an old friend from high school or college? 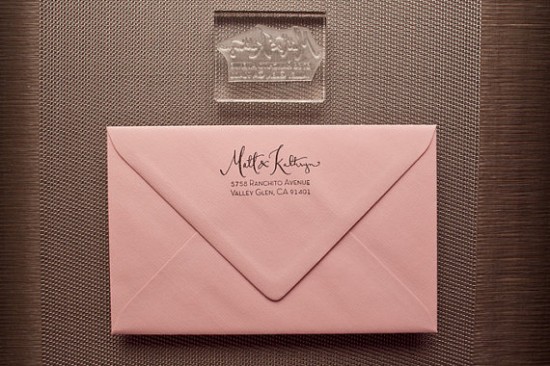 You’ll have until 11:59 p.m. on Friday, January 25 to enter the giveaway. One winner will be selected randomly and notified via email. Bonne chance!