You guys, this might just be the cutest thing ever.  Chris, a student in New York City, really wanted to propose to his girlfriend… so he worked with paper artist Jackie Huang to create a pop-up book with important elements from their relationship as part of his proposal.  Such a sweet idea – not to mention a wonderful keepsake! From Jackie: I’m a recent graduate from Art Center College of Design and specialize in creating art with paper.  I create many forms of art with paper but am most known for my pop-up work.  Chris contacted me about doing a pop-up proposal book for his girlfriend, Julia.  Over the next few months, Chris and I worked together to figure out the key moments of their relationship to tell their story.  Chris figured out the moments and text to go along with them, and then I created the engineering and illustration to fit the idea.  I’m proud to say that Chris proposed on March 29 and Julia said yes! 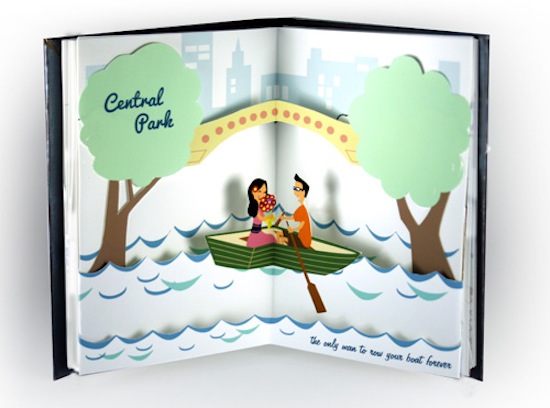