As some of you may have seen on Instagram, I celebrated my fourth anniversary of self-employment yesterday. When I first started Oh So Beautiful Paper, I couldn’t really share anything about my profession at the time – and nearly six years into blogging I still haven’t written this story down. So today I finally decided to get my act together and share the story of how Oh So Beautiful Paper came to be! Most people assume that I have a design background that led me to start blogging about paper. And while I definitely grew up surrounded by art and design, my professional background is actually in the field of international diplomacy! When I first started blogging in 2008, I was working as a civil servant (aka U.S.-based diplomat) at the U.S. Department of State, in the Bureau of African Affairs. Not exactly a direct correlation to paper and design.

But I should back up a bit. I was raised by two artistic parents: my dad worked as an advertising copywriter for most of his career, but now works as a semi-retired freelance photographer. My mom also worked in advertising (her job involved media buying) before switching to a different career in the late 1980s, but she’s also a talented painter and interior designer. I grew up in a very artistic environment, surrounded by art supplies and attending summer art camps. In high school, I took my first photography class and decided that I wanted to become a magazine photographer. But after a semester in college I quickly decided that I didn’t enjoy art school (Emily’s post from a couple of weeks ago will give you a pretty good idea of why it didn’t work out). So I took a few random elective classes… and switched majors to International Relations. It seems like such a random choice, but I was really, really good at my chosen field. It just felt like the right fit. 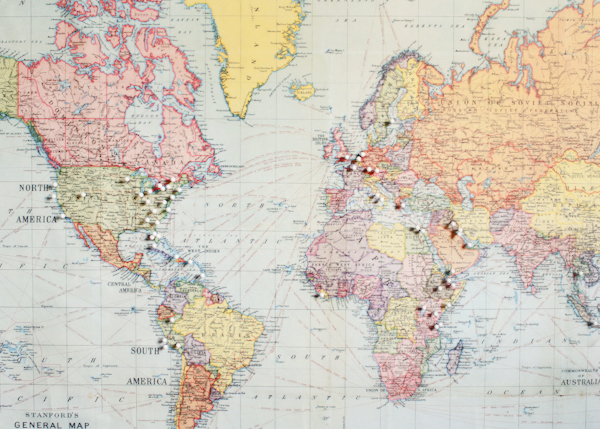 My time at the State Department began with an internship during my last undergraduate semester in the spring of 2003, and my office hired me permanently at the end of my internship. I was all of 22, but working in a position normally reserved for mid-level employees in their 30s: it was an overwhelming introduction to the world of international diplomacy! For the next few years, I worked in the Office of East African Affairs with responsibility for Somalia and Djibouti (both located in the Horn of Africa).

It’s hard to explain what my job actually entailed, but my work involved everything from writing briefing memos for senior officials to preparing internal budget proposals and documents, and from collecting study materials for U.S. ambassadorial nominees to writing U.N. Security Council resolutions. Some of the tasks were mundane, and some of them – like traveling overseas – were really amazing. I was lucky enough to visit several European capitals and almost every country in East Africa – Uganda, Tanzania, Kenya, Ethiopia, Somalia, Somaliland, and Djibouti – and I even lived in Nairobi, Kenya for about a month on a special assignment. In 2009, I transferred to the Office of West African Affairs, working primarily on Liberia and Ghana.

I learned a lot during those years. I learned how to prioritize urgent tasks and objectives. I learned how to distill a complex set of issues into a two-page memo. I learned a lot of other things that are harder to put into words. At the State Department, most people rotate to a new position every 2-3 years, so I worked with and for a lot of different people over the course of my seven years there. I learned what it means to be a good boss, a good manager – and sadly what it means to be a bad boss and mismanage an entire office. I saw people around me sacrifice their personal lives for their careers, and I learned that I didn’t want that for myself. I learned what it meant to burn out. I learned that a fulfilling career – and a fulfilling life – can mean a lot of different things to different people. Everything changed when Andrew and I got married in 2008. I discovered wedding and lifestyle blogs (yay!), and I fell in love with the world of wedding invitations during our 9-month engagement. After our wedding, Andrew encouraged me to start blogging as a creative outlet, and Oh So Beautiful Paper was born a few weeks later! My original goal was simply to showcase amazing wedding invitation design and connect couples with the designer that suits their personal style. I never intended for blogging to replace my career at the State Department, but the blog slowly grew and evolved into something more than a hobby.

Coincidentally, Oh So Beautiful Paper was growing at the same time that I was becoming increasingly disenchanted with my office job. I attended the very first Alt Summit in 2010, and one of my most vivid memories from the entire conference was listening to Maxwell from Apartment Therapy during the keynote session. Maxwell talked about his own decision to take Apartment Therapy full time: how it felt like jumping off a cliff, but also that he had to put in full time effort to see full time rewards. In April 2010, after a year under one particularly awful boss (which in turn was after two years under an equally terrible boss in another office), I made the scariest decision of my life: I gave notice at a stable, salaried job to pursue Oh So Beautiful Paper full time. I gave myself six months to make things work – and here I am four years later! 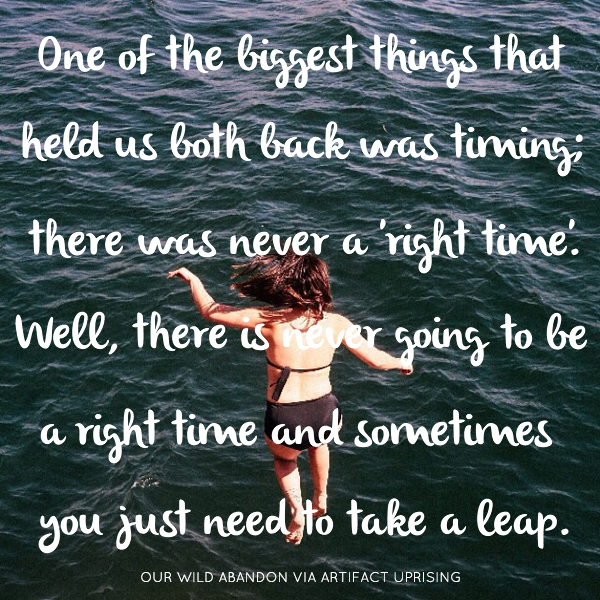 Quote by Our Wild Abandon via Artifact Uprising

I’m proud of a lot of the things that I accomplished during my years at the State Department, and I have a lot of regrets about things that I didn’t accomplish or that didn’t go the way I wished they had. I’ve been away long enough that I can forget most of the bad experiences and just hold on to the fond experiences and memories, and I’m so happy to have those stories to tell Sophie someday. But nothing compares to the satisfaction of running my own business, even if it can be super scary and ridiculously exhausting most of the time, and I still don’t know that I’ve reached a level that I would define as successful. I’ve made so many wonderful friends through this amazing community, and I’d never trade that for a million years.

Okay, enough sap! I’ll stop there, and thank you for reading this ridiculously long post!