Nole and I decided to continue our exploration of Tiki drinks, which we began with the Coconut Milk Piña Colada, with that other quintessential Tiki drink: the Mai Tai. The Mai Tai is sweet and citrusy, with just a hint of exotic from the orgeat syrup and velvet falernum. We’ve also added a special twist that makes this sunset-inspired Mai Tai as beautiful as it is delicious. So mix one up and pretend – for just a moment – that you are on a beach far, far, far away from here. – Andrew 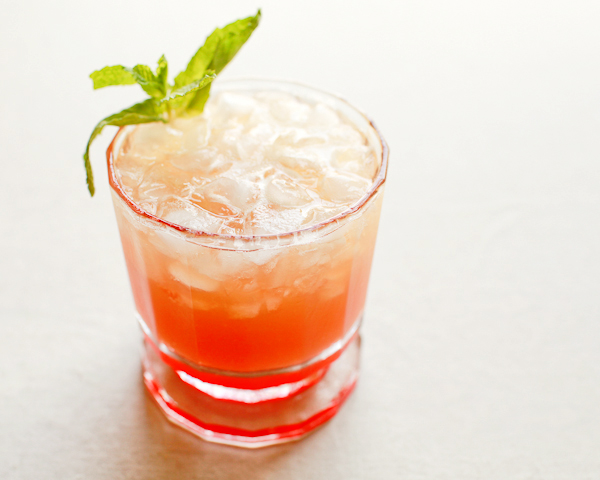 Illustration by Tuesday Bassen for Oh So Beautiful Paper

Add a dash of grenadine and a few dashes of bitters to a cocktail glass. Fill it with crushed ice and set it aside. Combine the rum, lime juice, triple sec, orgeat syrup, and Velvet Falernum (which I’ve used before) in a shaker. Shake well with ice and strain, gently, into the ice-filled glass, being careful not to stir up the bitters and grenadine. Garnish with mint. Enjoy! This isn’t the most authentic Mai Tai recipe out there. The original – invented at the most famous Tiki Bar of all time, Trader Vic’s, in 1944 – combined rum with lime, triple sec, orgeat, and rock candy syrup, a super-sweet version of simple syrup. No velvet falernum, no bitters, no grenadine. And that’s ok! The addition of the grenadine, balanced by the bitters, doesn’t do a whole lot to change the flavors of the drink. But what it does do is give this drink an amazing color gradient (as long as you pour gently!). It just looks so damn cool. Two ingredients are worth talking about a little bit more. First, the weird but essential orgeat (pronounced “or-zha”– that “g” sounds a lot like the “j” in “bonjour”), a thick and sweet syrup flavored by almonds and rose or orange blossom water. Flavoring sweets with almonds is a practice that goes back thousands of years in the Middle East and Mediterranean, but we get the name from the French for “barley” (because, oddly, orgeat originated as a sweetened almond-and-barley concoction because, why not?). It definitely doesn’t bring to mind the islands of the Pacific but it definitely tastes exotic. You should be able to buy some at most good liquor stores but the homemade version is lightyears better. Second, velvet falernum, a liqueur made in Barbados from rum, sugar cane syrup, lime juice, and plenty of spices – cloves, allspice, ginger, cinnamon, and maybe a hint of almond. It’s a deliciously complex Caribbean invention that’s not original to the Mai Tai, but will add a complex depth to the drink. I’ve also used Allspice Dram to great effect in a Mai Tai. So go forth and experiment.