When we started our cocktail column all the way back in 2011, we wanted to introduce classic drinks to a new audience. Along the way, we’ve started featuring more and more of our own drinks, which is ok too, but I want to make sure we don’t forget our roots. Here’s an easy but great spin on a classic summer highball, the sweet and spicy Cuba Libre. – Andrew Muddle the lime in a glass, then add ice, rum, cola (Mexican Coke if you can find it), and bitters. Give it a stir and enjoy. The Cuba Libre is not actually a cocktail, but rather a highball – a spirit with a mixer, like Scotch and soda or gin and tonic, usually served in a tall glass. They’re great and all, but a little too simple to spend too much time writing about. So we cocktailed it up a bit. (That’s a word, right? It is now.) Throw in a couple dashes of bitters (I remain a big fan of Hella Bitter’s citrus bitters) and you add just enough depth of flavor to call it a cocktail. 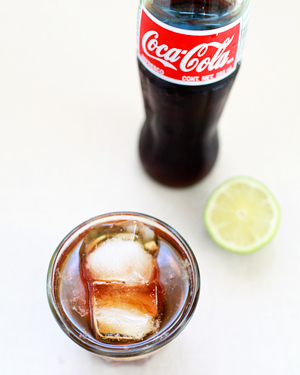 Any cola will do in a pinch, but Mexican Coke is just the perfect balance of sweet (using real cane sugar) and spicy. The Cuba Libre is traditionally made with white rum, but I like to use aged rum instead. It adds more flavor than unaged white rum, and its mellow roundness is a nice balance to the cola. The Cuba Libre has one of those fun popular origin stories that’s demonstrably untrue. American troops fighting the Spanish-American War, so it goes, introduced Coca Cola to Cuba where they met local freedom fighters who introduced rum to the Americans – and the rest is drink history. Except Coca Cola’s own history claims the soda wasn’t introduced to Cuba until 1900, while the war began and ended in 1898. So the story is probably a little less romantic, but a little more in keeping with the universal human urge to add booze to anything at hand and see what turns up, it just takes one random person to figure out that rum and Coke are pretty good together.

Don’t forget to let us know if you try any of our recipes. And if you do make one at home, you can use #osbphappyhour to share photos of these (or your own creations) on Instagram.