As you may have noticed, I adore wedding invitations that incorporate hand-illustrated details – and today’s real invitations are no exception.  These letterpress invitations were inspired by the chandelier in a summer house on Cape Cod that the bride, Jenya, shares with freelance designer Nina Max Daly, who designed these beautiful invitations.  This design has such a wonderful and personal story behind it, I’ll turn things over to Nina…

From Nina:  My lifelong friend Jenya and her now husband André decided to get married this past summer on a small compound of cottages on Cape Cod that our families have been renting together for over 20 years. Jenya is also a graphic designer so I presumed she’d want to do her invitation herself, but she was way too overwhelmed with planning a huge wedding on her own to do it, and asked me. I was honored. When I first spoke to Jenya about the invitation she had little idea of what she wanted.  She said the wedding would be ‘very casual and very elegant’ with lots of really good food.  She said that she wanted lots of re-purposing and collaboration.  All of the serving dishes would be from our houses, rather than use rental serveware.  The flowers would be what was growing on the property, hydrangeas,  the vases collected from various family members.  My mom would make the wedding cake. Over the dance floor, she planned to hang the chandelier that my mom found in someone’s trash and which now hung in the tiny sun room of the Cape house that Jenya, my sister Anna, and I share each summer (and now also with one kid and two husbands).  She thought we could bring couches out from the houses and put them around the dance floor so people would feel comfortable either lounging or dancing late into the night. The chandelier image really resonated with me, as did the idea of the couches and re-purposed dishes. So I went with it.  I love to draw, so I started drawing, a couch like the one in our Cape house, a chandelier like ours, some of my favorite old dishes and silverware.  For color, I chose a lighter shade of hydrangea blue. 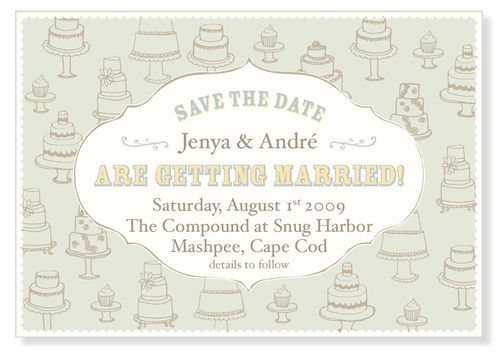 André’s good friend Deb is a letterpress printer and owns Smudge Ink.  Deb and Jenya printed the invitations together on a weekend. After the invitations had gone out, Jenya re-purposed several of the designs to use as signage, table cards and gift labels for the wedding favors, little jars of raspberry jam that Jenya’s mom mad with the raspberries we grew. The project came out beautifully and the entire wedding as well as the invitation was a true collaboration. Seriously, how cool are these invitations?  I love the dinner plate RSVP card, not to mention all the other illustrated details from the mini wedding cakes to the couch and chandelier.  Such an incredibly sweet design, with a wonderful and personal meaning to match.  Thanks Nina!